One of the best things about being a content writer, for me at least, is I get to learn new things and acquire more knowledge. I love doing research. I love finding out facts. I love getting and giving trivia.

So one of my tasks at work that I’m enjoying right now is I get to write stuff again (being a content writer isn’t all about actually writing stuff, just so you know). I am kind of OC, therefore, you can bet I usually try as much as I can to find out every useful information. Sometimes, it sucks that I can’t include some information as they are not vital to the specific topics. But I value what I learn so I take notes.

Anyway, here is one of my newer articles that I really liked writing. I got to talk about technology and new stuff in general. It’s not at all that techie that any non-techie reader won’t have a hard time understanding it.

So, for today’s #FeatureFriday I am featuring NEW TECHNOLOGIES. 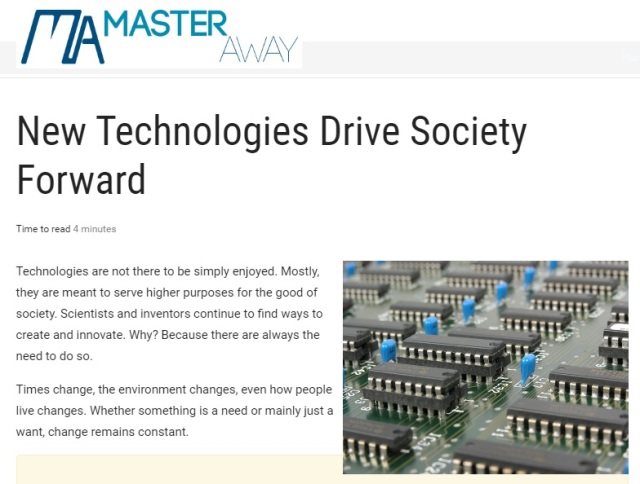 I am all about sharing what people will hopefully appreciate. Did you like this one? Let me know in the comments! 🙂

First, let me greet you with this one:

LOL!!! I know, I know, the whole thing leaves a lot to be desired. But what can you expect from an AI writing (and singing!) Christmas songs???

To write the song, the researchers first had the computer produce a story about the festive image. Then, they selected a rhythm of one beat per word, linked the endings of sentences to the endings of the music’s bars, and tuned it so that the vocals would occur in a “natural” pitch range, the scientists said. The neural network then took the song to completion.”

Sadly, you can’t add actual talent to AI, just memory, even if this is the newest innovation. Not yet, anyway. We need more innovative technology for that.

Speaking (playing?) of technology, check out the “untouchable music of the theremin”. I never heard of the theremin until I chanced upon this on TED Talks. Here,

Virtuoso Pamelia Kurstin performs and discusses her theremin, the not-just-for-sci-fi electronic instrument that is played without being touched. Songs include ‘Autumn Leaves,’ ‘Lush Life’ and David Mash’s ‘Listen, Words Are Gone.’ ”

I enjoyed this talk. Part of it was because the theremin was interesting, part of it was because I was in awe of Pamelia’s talent and I loved the music, and still another part of it was because Pamelia was charming in her shy, giggly way. She started off nervously, and actually seemed nervous all throughout, but she made up for it with her anecdotes and funny little jokes. Love her already. Well, this was filmed way back in 2002, but who cares? Oh, and she does not anymore carry the last name Kurstin (from her former marriage), so call her by her birth name Pamelia Stickney.

And while we’re talking technology, who knows it best (my opinion) than Japan? Just ask Maywa Denki…Okay, I’m not really sure what they’re going to say, but these guys are taking technology and music to a funn(i)er level.

The two-men team of Tosa brothers Masamichi and Novmichi are responsible for some of the most fun instruments around. I like them because this is also the way I create sounds when I’m in the mood–I try stuff. I like them more because funny aside, they are actually inventors and have musical abilities themselves, it seems.

Two of the stuff these crazy inventors made:

The popular but absurd otamatone (that’s the funny Novmichi presenting). I want one for the kids! (and me!)

My favorite, so far, because I love beats, Mr. Knocky

They have more inventions so just check out their site. Meanwhile, here’s a cheery little Christmas song. Guess the song 😉

Okay, now we go classic. We’ve got the barrel organ. I still call this “technology” as every generation has its own technology, regardless of whether they’re new or innovated.

The basic principle is the same as a traditional pipe organ, but rather than being played by an organist, the barrel organ is activated either by a person turning a crank, or by clockwork driven by weights or springs. The pieces of music are encoded onto wooden barrels (or cylinders), which are analogous to the keyboard of the traditional pipe organ.”

I find the barrel organ quite interesting, innovative, and judging from this Patrick Mathis tribute to the King of Pop, quite hip despite its history. Trust me, you’ll love this video…

Lastly, for today, we’ve got a truly fantastic instrument called the Marble Machine from Wintergatan. It’s not so much the music that interests me here,  but how the machine was awesomely created by Martin Molin. Such creativity and precision!

Martin explains how he thought of this mechanical-slash-musical instrument: Martin Molin tells all on his Marble Machine. His marble machine is said to be not the first of its kind, nevertheless, what a marvelous invention!

I know you enjoyed this post as much as I did. Love you, guys!!!