Aaaand we’re back! Last time, I asked someone’s permission to let me repost/reblog her writeup on “Missing San Pablo.” As promised, here is its second and final installment, with some translations and comments from moi.

Again, we hope you enjoy this one! Oh, and this one would be quite “gastronomic” 😉 Forgive my lay-out problems. Fixing…

(This is an old post, dated Feb. 2009. Written during the time that I moved out of San Pablo. But now I’m glad that I am back home. I’m sure most of you who are no longer physically residing in San Pablo can relate to me.) 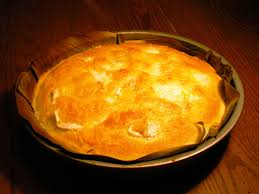 This is the bibingka, a kind of cake made up of sticky rice, cooked through direct steaming. In some places, bibingka looks totally different, like what you’ll see if you CLICK HERE. In San Pablo, we call that biko, I think. In some places, it’s sinukmani, which we also have except it looks different. It’s complicated, I guess. Now take a look at HOW BIBINGKA IS MADE

Bibingka used to be the size of a regular saucer, but I normally see them now in smaller sizes, even much smaller like these ones above, the kind vendors sell aboard the bus when they get the chance at bus stops

[Ed.– That’s a bibingka at left. Shreds of buko (young coconut) meat are always added in the bibingka mix (well, always, as far as I know), then butter is spread on the top when the cake has taken shape. To make them extra-special, the following may be added as toppings: pieces of itlog na pula (salted boiled egg with the shell painted pula or red…don’t ask why, me not know), cheese (strips or grated), and grated coconut meat. I would love to try out jam or jelly on them, I bet they’ll be masarap (delicious)!]

8. Comics Den – This place used to be a popular hangout for young ones during my time. They had a cool collection there. Across the den was the residence of the Banayos that had a band studio that my friends (including my ex) would often rent for their usual jamming sessions. I wonder if the studio and the den are still open. The den is likewise a symbol of the local punk scene. ‘Nuff said. [Ed.– I believe this is the place where I accompanied artist Jonas Diego, back when he was still working on his early piece, The Book of John.]

9. “Ano baga!” (“Whaat!”) – I do miss the San Pableño accent. A mix of the Batangas, Laguna, and Quezon province’s tones. It’s quite interesting that we have terms in San Pablo (and nearby places) that when we mention them in Manila, we hear “ANU ‘YUN???” (“WHAT’S THAT???”) quite often.

[Ed.– QUICK LANGUAGE 101:“Ano baga!” is usually, but not always, more of an expression rather than a real question, as if the speaker is confused about something (“What is it, really…?”), in disbelief, or is exasperated (“What are you looking at, punk!”).

The Filipino language is also similar to the Chinese in the sense that when the same word is spoken differently, with only a change in intonation or speed, it may mean something that is simply related or something else entirely. For instance, in San Pablo, saying “liban” in different intonation and tenses relays other possible meanings–“except” (if slower), to go over something literally like over a fence (fast, as in the sample given), to be absent or go on leave, or to delay something.]

10. Lanzones – Whenever rambutan season, which I don’t like, is almost over, lanzones seeds start to grow abundantly. The San Pablo variety is, I think, the sweetest (I am sure those from other places would love to disagree). I like ours better than Camiguin’s for the seeds are smaller. My favorite place to buy this from is the store at M. Leonor, beside the funeral parlor (…oh, maybe that explains the sweetness…?).

– Delfin’s luglug (or palabok, a type of pancit)inside the public market [Ed.– Not sure if it’s the same place but I rather like Onie’s luglug. I often buy there still when I’m at the public market. The price has remained at P20 for the longest time, which is one thing that makes it cool.]

– Mami near the railroad/highway [Ed.– I have not tasted delicious mami for a long time. The best I have ever tasted is—well, was—at a mami-an (place to order/eat mami) that could be found along Sampaloc Lake, the part near our barrio. We could easily go to it back when the Rotary Club house (or whatever it is called) situated in our barrio had its gates open and anyone could pass through the wide pavement leading to the lake. It’s closed now and there is a much, much narrow alternative route. The mami-an has long been closed as well. Not sure if they relocated somewhere else.]

The siopao is a steamed bun filled with either chicken or especially pork (asado/pot-roasted or bola-bola/meatball-shaped) and eaten with a special sweet sauce you pour in. At times, the bola-bola has salted egg added. Sizes vary but the usual is around the size of a saucer. If it sounds Chinese, it’s because it is, like many foods that found their way on our tables…or should I say in our tummies? 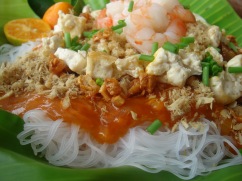 This description from its source explains luglug: “a noodle dish served with an array of seafood garnish, spring onions, hard boiled eggs in thick rice noodles. Usually served on deep bowls due to its saucy nature,…Luglug sauce also should be lighter in taste as it uses more of it” compared to other noodle dishes. Well, its noodles are not that much thicker, really, but otherwise, it’s spot-on. I do remember very well that when I was a kid, our favorite luglug-an  (place to eat/order luglug) would wrap take-out orders with banana leaves. It’s unfortunately not the case anymore

Mami is the Philippines’ version of chicken noodle soup. While its origin is obvious, its name isn’t Chinese. China’s Ma Mon Luk introduced the “Mi” (noodle) dish here. Just put two and two together and you get the idea *wink!*

– Mang Bert’s sorbetes (Mr. Bert’s ice cream) at Central School. He used to stay in one place near one of the buildings and sell “dirty ice cream” on cones [Ed. – Note: Peddlers were allowed in our school premises before and could walk more freely (which, in hindsight, was probably not very wise of management to allow, although perhaps they were monitored but I was too young to know or care).

Note again: “Dirty ice cream” here is just a term for ice cream, which is really more of a sorbet, being sold as street food, peddled by sorbeteros pushing either wooden or tin carts where ice cream is contained. Each cart may offer up to three flavors that are served in wafer or sugar cones, sometimes plastic cups (although I am not sure if they still do that, especially now that use of plastic is supposedly banned in businesses belonging to the service sector, unless they now use paper cups). This ice cream, according to my research, is mainly from coconut milk, unlike others that are made from animal milk.]

– Botak’s refreshing flavored drinks, also in Central School. Mainly, he pushed a cart with various liquid fruit flavors that he poured in cups of ground ice, each cup was one order. 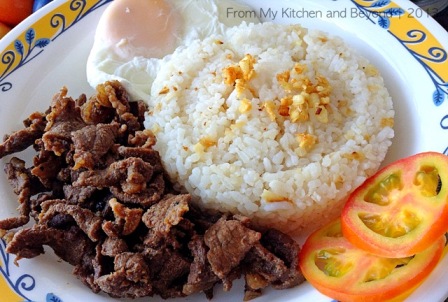 Any tapsilog order usually comes with vinegar (sometimes sprinkled with crushed garlic or chili) to dip the meat in. Many food establishments offer this or have made “-silog” dishes their main offerings, thus they are called tapsilogan. They pair rice and egg with various meat products (ex. with hotdog=hotsilog). Presentations vary in how the rice is cooked, if tomato or cucumber slices are added, if they offer side dishes (often pickled green papaya called atsara/achara/atchara, however you spell it) 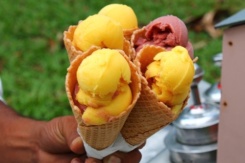 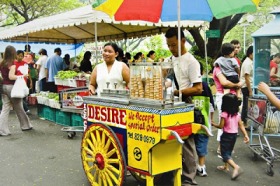 Mamang Sorbetero (Ice Cream Man). You’ll know he’s around when you hear him ringing a handbell

A magtataho walking as far as he can go to bring taho to anyone craving for a healthy,  alternative way to satisfy his/her sweet tooth (er, teeth…? he he). You’ll know he’s coming when you here his call: “Tahooooo!!!”

This is what you get when you heed the magtataho’s call, a sweet soya treat 🙂 I actually have been buying this almost every week 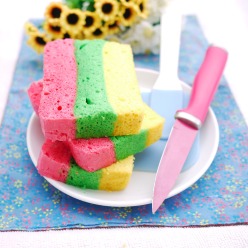 The macapuno or sweet coconut strings that may be eaten as dessert as is, or even used as an ingredient for other products 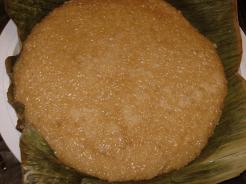 12. Dely’s Beauty Parlor – This belongs to my aunt! This is one of the two (am I right?) oldest beauty salon in the city. Its original location was in front of the Bank of the Philippine Islands (BPI) along Paulino St., near the Liceo school. It was still back on the 1960s when my  “Mommy Deli” (now called Lola D by her grandkids) opened it and it became the salon of different generations of the girlie girls of San Pablo. And because MD is our aunt, of course, we got free haircut, and even free makeup (whenever we had school programs to go to), including manicure and pedicure.

The parlor used to be our family’s drop-by place, every family member who went to the city proper would always drop by to simply pay MD his/her respect. When she had to leave the location after more than 30 years, the women “revolted” and demanded that it continue. Its present location is at the terrace of my grandma’s house. It’s what gives life to the compound especially with most of the original residents gone, including myself. Ayyy the parlor is here to stay forever! Pag-uwi ko magpapagupit ako… (When I get home, I’m getting a haircut…)

I still have lots that I miss about San Pablo City–things, people and occasions. Most of all, my family. The endless foods, chit-chats, and occasional fights. Nothing beats home, that’s for sure. That is why it isn’t only my kids who get excited about coming summer vacations because we’re going home again. Hayyy, lalafang na naman ng sobra-sobra… (Lots of food-tripping once more…)

ABOUT THE AUTHOR: Ayie, as many fondly call her, can be found at THE CURACHA CHRONICLES.

Didn’t I tell you about things getting “gastronomic”? 😉

Don’t be stingy. Click LIKE if you liked this writeup 🙂 For any questions or comments, go ahead and type away! Again, all copyrights, except those of the images (which are all either linked to their respective sources or credited to owners) go to Ayie.