I was going through my stuff (I never finish going through things…) and realized that I did publish my first book! Like many of my alma mater’s alumni, I published one. I think there are only three copies in total — one for me and two for the school. So I have my copy with me. One is in my college’s library. The last one, I am not sure. Probably in the university main library.

I’m referring to my undergraduate research/thesis. It has a wordy title, which I used in this post’s title. My study focused on telenovelas, or telenovela, which is Spanish for TV soaps. But specifically, as stated in my book’s Definition of Terms, a telenovela referred/refers to “a foreign (Spanish-speaking) TV drama serial dubbed in Tagalog.” For those who don’t know, Tagalog is one of the Philippines’ many dialects and is generally regarded as the one most understood.

I may not have watched everything on TV. However, because I liked to observe and know things, I was often updated about local television. So even if I didn’t really watch telenovelas at the time, I knew all the titles of those that were showing back then. I was well aware of which came first before what, and how the mostly-Mexican soaps made it to local TV.  That was long before K-Dramas invaded our screens. Also. the first telenovela, “La Traidora”, was the first-ever foreign soap that was dubbed in our language!

“Filipinizing” or “Tagalizing” (both coined terms) began with several Japanese live-action shows that used to be English-dubbed. Next, they Tagalized an anime of a children’s classic story. We didn’t have to wonder how far the new practice would go. Soon, it was Mexican soaps! We did not really have them on TV since the general public would not understand conversational Spanish. TV networks probably did not care to create captions because the general public was not keen on reading subtitles either. Again, this was waaaaay before K-Dramas, or Koreanovelas as we call them.

The start of Tagalized Mexican soaps was such a big surprise. Translating and dubbing TV shows using the local dialect paved the way for Spanish-speaking soaps to enter the scene. I will not anymore discuss Philippine TV history here, though. We’ll save that for another day.

That said, my study was actually my thesis adviser’s idea. I had a different one that was going nowhere (I don’t even remember what it was about). I think that was mainly because I was at a rough time in my life. Rough time or not, I had to force myself to concentrate. I had to graduate! It would have been a waste (and stupid!) if I didn’t graduate just because of one unfinished requirement. Honestly, I’m thankful that he gave me the idea. It sparked my interest more. And because I am a writer who loves to do research, I actually enjoyed writing my research. The interview parts weren’t fun, but no pain, no gain, right? To be frank, it was not a hard topic at all.  I didn’t/don’t care. I had fun writing it and it allowed me to graduate.

I took to heart the quote that I put on page 3:

“I am the master of my fate; I am the captain of my soul.” 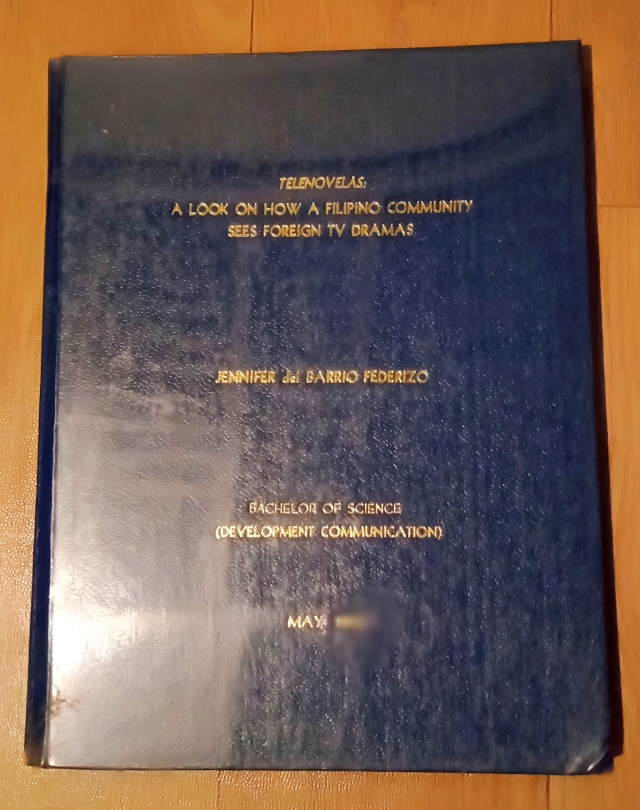 “TELENOVELAS: A LOOK ON HOW A FILIPINO COMMUNITY SEES FOREIGN TV DRAMAS” An Undergraduate Research By Jennifer Del Barrio Federizo (a.k.a. Me)