I did have a partner or co-writer. I didn’t mind since I was still new to the school paper and needed to learn the ropes. He knew more about the music, plus, he was much cooler than me. Honestly, I wouldn’t really know if I could do the interview without him. We were interviewing celebrities…! We were to interview THE DAWN, “pioneers of Post-Modern Rock” here. I’m not sure who came up with that one (“pioneers of…”), my co-writer Butch or me, or if we got that somewhere. But pioneers, they really were. 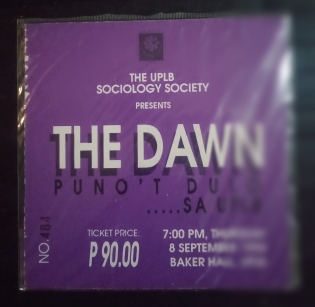 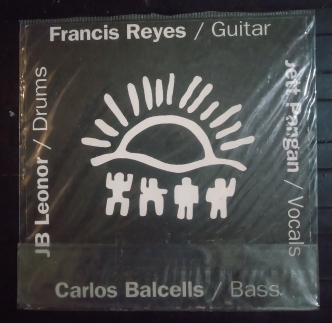 They were doing a concert at our university. So the paper got permission from the organizers for the interview, which they arranged and made happen. We were allowed since the band had an important album out so, you know, it’s still publicity, however small. It was actually maybe an hour or so before the concert. They let us go inside their parked bus to meet the members. Unfortunately, for some reason, Jett Pangan, the main vocalist, was kept busy outside the bus. Usually, it’s really the vocalist who’s the main face of the band, right? So it was a bit of a downer that we couldn’t talk to him. I only have three out of four autographs. No cellphone yet, no camera, so no photos 😦

Not that we didn’t enjoy the interview! Of course, we did! I didn’t particularly know all of them then. I really just knew them as The Dawn. I just hoped I was asking the right questions. So thank goodness, Butch was the enthusiast. It wasn’t me who described Jett’s voice as “nasal”, though. (It’s true, Butch, so please don’t come down from heaven and scare me.) I wrote the first draft, he did the final draft where he added everything else. I do disagree about the description. We went to the concert (for free!) after the interview and, despite my headache caused by being near large loudspeakers, Jett sounded fine to me. Many years later, I would watch Baby The Musical and hear Jett sing live on stage again — great voice and definitely not nasal!

Being a writer does have its perks sometimes. 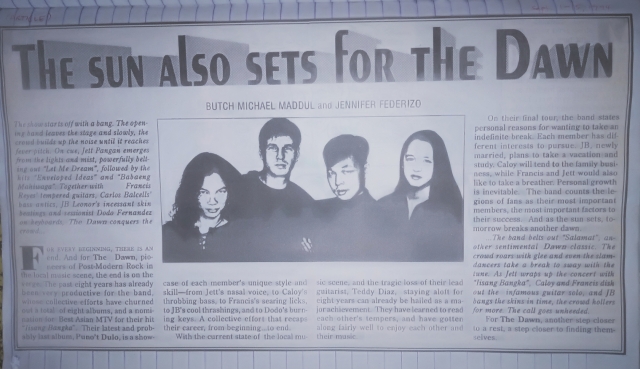 When I worked for a tertiary school, I had experience copywriting a few things under the PR & Advertising Office. My next job, which was a joke, for lack of a better term, got me as Copywriter. I copywrote stuff for them but I will never know if or when and where they were published. This is a whole different story that will have to wait to be told. But let me emphasize that because that second one was a joke, I don’t count it as employment (I didn’t get paid either).

Published or not, not any of my previous works qualified as an advertorial. The online Oxford Dictionary defines “advertorial” as:

It is safe to say that I only had my FIRST ADVERTORIAL PUBLISHED when I joined the cancer-focused publication. There was an ex-deal and I was assigned to write the advertorial. But here’s my problem: It was basically a medical advert. Medical...Of course, I could not say no, however much I wanted to. It was my job, right?  But I was very skeptical of the would-be outcome. I wasn’t sure I could write a good advertorial. I did not want to humiliate myself. Mostly, I did not want to humiliate my bosses and cause a problem with the clients. I had to try my very darn best!!!

I was to write about a particular drug that’s for a particular type of cancer. I was to advertise, editorial-style. The good news was I was given materials to read about it. The bad news? The materials were thick. The words were quite medical and scientific. And I had to balance the medical/scientific jargon with the layman’s terms.

I remember spending nights at the dormitory’s common area reading and trying to write. Mind you, at that time, I had no laptop. I had to write notes and underline things on the photocopied pages. Cellphones weren’t that sophisticated yet back then plus, for the longest time, I used analog phones. So guess what? No access to the Internet outslde work unless I went to the Internet Cafe. That could help me understand things more but I did not want to spend my own money for that.  Surprisingly, I found that I was not nearly as ignorant as before about cancer as I thought I would be. So I wrote it.

It was not like I would just write it then we’d publish in the upcoming issue. The pharma had to check my output, which was very understandable. I did want them to check the advert so they could correct errors and I could revise things. The biggest surprise to me, however, was they hardly changed anything! I don’t even remember that they did. You wouldn’t know it just by looking at me, but inside, I was kind of dumbfounded. I didn’t expect it to be that “easy”. It gave me more confidence in myself.

That’s the advert below. I blurred the title that carries the name of the drug and the logos of the pharmaceutical company. I’m just not sure if they’d be okay with it. The words in the article are also tiny so I suggest you don’t check anymore. Personally, if I were them, I wouldn’t mind as that would be free advertisement. I’m not them, though. Additonally, I’m not sure if the product is still out there.

Sorry it took me days to post again, but I only found my copies of our magazine. It was the publication that got me as its Editorial Assistant and in-house writer. My main position was the first for which I did various tasks that I don’t need to enumerate here. The second just came with the job description.

Below was my first-ever published article as a professional writer. It was actually a sidebar article, but it felt like a big one.  I wrote various stuff in this issue (like I always did in all the issues that were published during my time there). In fact, I copywrote the mag’s Christmas message on the left. (That wasn’t my first copywriting experience, though.)

The article on the right was special because it included my by-line. Yay! It’s a piece that wouldn’t win me anything but it still means something to me.

Before we start. I KNOW it’s past November. But I still want to continue this challenge. The point is to try to keep blogging till I’ve posted 30. Anyway,…

Day 17 of the #NaNoPoblano2021 challenge. Major Theme: “A Few of My Earliest Things”. New sub-theme: “My Firsts”. Related post: My Evolution as a Writer.

This may not be my very first published article (that was last time), but it was my very first SOLO article. Granted that it was just one piece that was a part of one whole collaboration. We featured eateries and restaurants in and around campus back then and I was assigned this. I don’t know If the place is still there.

It is still one whole writeup, however short. Feel free to laugh at “Of course, the restaurant also has chairs.” I’M laughing!!!

Day 16 of the #NaNoPoblano2021 challenge. Major Theme: “A Few of My Earliest Things”. New sub-theme: “My Firsts”. Related post: My Evolution as a Writer.

I know I have been skipping days again. I have been trying to go through things and find writing-related stuff. I was looking for something else that I remembered but in doing so, I found THIS.

This was my very-first published article. I just joined the college paper and was put in the Culture (‘Kultura’) section. My very first editor, a friend whom I had known since childhood, assigned me the topic. (DISCLAIMER: There was no nepotism involved, okay?). I worked with someone else on the article but who cared? I was excited. I was happy to be part of the paper. I was happy to write about relevant things. I was happy doing research, enjoying my time at the library, and writing what I could about protest songs, their history, and their relevance to the Filipino people. I was tickled pink when it came out!

Here it is, titled “Awit ng Pakikibaka: Plakard, Tinig at Gitara” (“Protest Songs: Placard, Voice and Guitar”), my editor’s idea. Maybe for seasoned journalists who write and/or speak Tagalog, this looks amateurish. I understand. It was. I just wish I remembered it last November 30. That would have been a fitting tribute to one of our greatest national heroes, Andres Bonifacio, on his commemoration day. He wrote one of the best protest poems ever. It was turned into a song in the ’70s or ’80s (will check which exact era).

I am just sharing a photo of the article because I don’t have it on Word file. No time to re-type, and definitely no time to translate into English.

My first full article in the school paper