So last Thursday, I was just buying a hotdog sandwich at the burger place very near the dorm when someone stood beside me and said in a low tone, “Don’t go up the dorm yet” like some sneaky “holdaper”, I half-expected to be robbed. Of course, I was surprised and had to scrutinize and realized it’s my theater-person friend “W”. 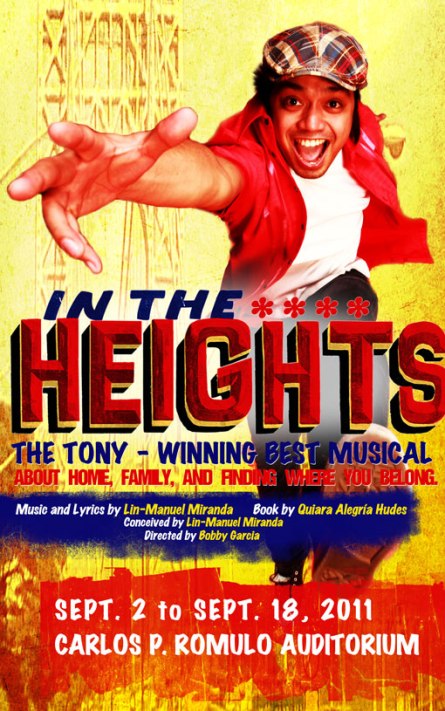 Apparently, she had two free tickets to Atlantis Productions‘ presentation of Tony awardee In the Heights and was hoping (but not really expecting ’cause she knew I often came home late these days, er, nights) to invite me to come with her. Apparently again, the one supposed to go with her backed out. Hurray for me!!! As they say, one person’s trash maybe…Okay, not trash, really, but you get the analogy, right? RIGHT?

So, not to waste more time as it was way past 7pm and the show was to start at 8pm, we brought everything that was with me back to Ayala and into the Carlos P. Romulo Auditorium at RCBC.

While it was good because it was free (he he, the best things in life), it was actually a really good experience! I think anyone who shelled out and will shell out money for it was/will not be disappointed. Non-fans of rap may actually like this rap-filled show. You can’t understand everything – heck,  even rappers might not understand every word – but you can surely understand what’s happening. There’s lots of hip-hop with also lots of salsa, merengue, soul thrown in – modern meets classic Latin, I say.

What struck me about the interwoven stories are their similarities to the Filipino scene, from the everyday hardships to the sense of family. Even to the idea that people get into their heads that America is the answer to everything. Just ask the main character’s father.

The main character, by the way, is Usnavi (hee-hee about the name, wait for the punchline), played by Nyoy Volante. Nyoy surprised me in Hairspray before, he surprised me even more in In The Heights. I never expected he could rap, and so well at that, he could give any rapper a run for his money. Rapping with a very passable accent. Not perfect, but hey, who’s complaining? There was a smooth way about him that I loved listening to him every time. Either that was actually because of his style or because of the way the piece was composed, I don’t know, and I really don’t care because I loved it!

It was my first time to watch most of the performers. I was surprised to see Jackie Lou Blanco and I had to think hard before I realized I was looking at Calvin Millado. Jackie Lou was good in one of the songs, basically her solo, which title I have yet to find out (sorry, as of now, I have not gotten hold of a programme ’cause it was all so sudden, besides, I don’t think there were available programmes that night already). Calvin’s portrayal as the father of the Rosario Family, for me, was very touching.

I was not surprised to see reality singing competition show (or whatever you call it) finalist K-La Rivera because my friend mentioned her while I tried to gobble down my sandwich fast inside a taxi on the way there. Acting-wise, she’s okay. Nothing “Ooh”-worthy, but okay. She has a very nice singing voice, I must say. Many more training to go, perhaps, but very promising. She should do this more often. Less TV, more theater, ’cause in theater, she doesn’t have to scream to be appreciated.

I had been crushing on Felix Rivera before so it was a treat to see him again onstage. Ever the heartthrob, he got to ***spoiler alert*** kiss the girl again. I truly love his vocals. Very nice, very apt for musicals. I really appreciated him in Avenue Q that I watched sometime ago. Very commendable, too, were veteran thespian Ms. Jay Glorioso who was Usnavi’s adoptive lola and Bibo Reyes whose Sonny was quite the comic relief. Ima Castro was there, too. A very reliable performer she was, of course, though I felt her character did not showcase her talent that much. I wish I had seen Aida; I bet I would have enjoyed her.

But oh, my fave of them all that night was Ms. Tex Ordonez! I was so impressed, I actually made sure I asked my friend about her name. Her Daniela was wicked good! I never for a moment doubted she was a Latina living in Washington Heights. The look, the actions, the delivery of words,..excellent portrayal! She rivaled Bibo in the funny department… Hmnn… Actually, she was the funnest and funniest (sorry, Bibo, but you do get the second place award). Kudos to her!

On to the other actors and swings. It was apparent that one requirement for them to be part of the show was for them to be good dancers. They were expected to dance various numbers. Personally, I felt that much was lacking. Not really in the routines but in the dancing itself. Awkward moments, unsure steps, shaky lifting executions…But okay, it was just the start, it was not even really the real first night. I supposed they would get better every night.  One curious question though: Who was that Ralion Alonso look-alike? If I didn’t know better, I’d think it was him, only he didn’t grow older.

Now the music! Some beats were catchy enough, if only one was fast enough to catch all the words. I didn’t think anything was memorable. Still, I am not closing my doors. I think these are the kind of songs that you let grow on you. I wonder where I can get a soundtrack…

That said, this show is very much recommended. If you have the time, try and catch it. It’s got a limited run so don’t miss it now. Better yet, do as I did. Buy a hotdog sandwich and you just might get a ticket, for free.

That’s the whole cast for you. Image from BroadwayWorld.com, photo by Jaime Unson 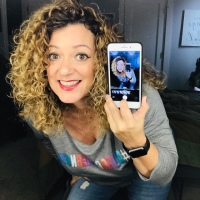 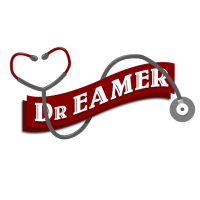