***NOTE: I am back trying to complete my ten posts for November. It’s always funny in a not-so-ha-ha way that everytime I try to do writing challenges, something comes up to distract my mojo. I was doing well posting my first Nano Poblano posts daily. Then personal problems distracted me. I also suddenly have a new client (well, she was a client before) who has been giving me various writing assignments. So yeah, my brain is usually cooked by evening. I just want to binge on Netflix. Well, I do actually binge on it.

Anyway, this is a fine time to re-share a film review I did in the past. I’ve been wanting to for quite some time but I never found the right timing. Maybe this is it. I originally wanted to post for #MondayReviews but, well…

Here it is. I did some editing to make it more readable, though, and updated. By the way, ALL images and video belong to the producers, okay? And, oh, for more reviews, visit the CRITIC’S CORNER, please.

JUNO THE FILM THAT MADE ELLEN PAGE?

Ellen Page in the title role of JUNO

I am, admittedly, partial to movies with the word “indie” attached to them. I first heard about the 2007 Fox Searchlight film JUNO through cable-channel surfing. When I heard people gush about the so-called indie film, I said to myself, “Heck, yeah, I gotta see this flick!” Belatedly, after more than two years, I finally chanced upon a copy at a video store and whaddya know? I got me my JUNO.

The movie tells of a girl named Juno MacGuff (Ellen Page), who is equipped with sharp wit and an even sharper mouth. A die-hard rocker kinda girl with a love for slasher movies, she lived by her own rules (practically her own, anyway) sans the usual teen angsts and oh-I-hate-the-world attitude.

Juno is mature for her own age. However, at sixteen, she is still prone to the wayward ways of the juvenile world. She makes the mistake of sleeping with her dorky male bestfriend Paulie Bleeker (Michael Cera) one supposedly boring day. “Supposedly”, since she tells quirky cheerleader Leah (Olivia Thirlby), her female bestfriend, that she planned it. But the plan has resulted into something she did not expect. And she pays for it in a span of nine months. 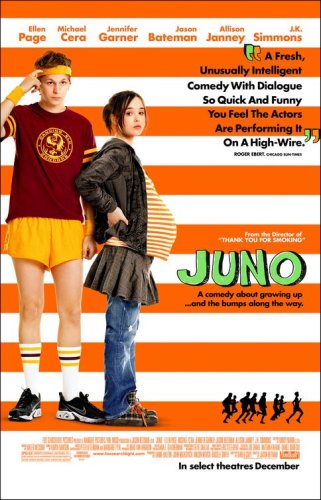 Suddenly, Juno is faced with going through the inevitable phase. And then there’s the adoption to think of. She wants to make sure that her baby’s future adoptive parents (Jason Bateman and Jennifer Garner) are the perfect ‘desperately seeking spawn’ couple she thinks they are. As one character puts it, “That ain’t no Etch-A-Sketch,” pertaining to Juno’s positive pregnancy test. “This is one doodle that can’t be un-did, Homeskillet.” She needs to make it right for her kid.

Juno worries that her child might grow up in a dysfunctional family such as hers. It is emotional baggage that the seemingly-uncaring Juno has carried around for years and is now being brought to the surface.

Interesting? Well, loads of people can’t be wrong. I know what endeared this movie to critics and public audience alike; it’s what endeared it to me.

It’s an adorable piece of unconventional, not-too-dramatic, creative storytelling. It tackles a very real issue with a humorous take. It is not to make light of the situation. Rather, it teaches about loving, forgiving and learning to let go.

The film deserves the praises, nominations, and awards it received. First-time screenwriter Diablo Cody spun a very good tale about a girl forced to deal with matters that even some adults fear facing. (Don’t ask why her name is Diablo; it’s an alias and is another story.)

The movie is a coming-of-age comedy except Juno had to mature faster than necessary, and she knew this. As she said in a scene, she was “just out dealing with things waaay beyond my maturity level.” Frankly, she dealt with the situation much more maturely than at least one of the adults.

Kudos to Cody for a wonderful script. She relayed the story in a manner that while she did not promote premarital sex and teenage pregnancy, she emphasized the value of family support during these dark times. She took a stand as well against abortion. Subtle, but a qualified stand.

What made this movie stand out more were the wickedly delicious dialogues mostly delivered by the wickedly brilliant Ellen Page. Language was often young and hip to emphasize the kind of girl Juno was. The adults had their own witty lines and comebacks as well, right at every turn. But it’s a good thing that Ellen played the lead role because she would have stolen the scenes from any other lead anyway. They were all good, but Ellen was just…well, again, wickedly brilliant!

JUNO made an instant Ellen Page fan out of me. [Ed. She’s the main reason I’m watching THE UMBRELLA ACADEMY.] So I  researched on her and found her interesting film biography. She has done roles others can only dream of. Ellen tends to play dark roles, but she has said she is open for other kinds of roles (e.g. Kitty Pryde a.k.a. Shadowkat in X-MEN: THE LAST STAND, Ariadne in INCEPTION).

For JUNO, Ellen received nominations and awards. She now carries with her name the “Academy Awards Nominee” tag. She has said that one advantage is she can now choose roles. Maybe it’s a joke, but I don’t think she even had that problem before at all, anyway. Real directors know talent when they see one.

JUNO gets FIVE STARS from me for being unconventional, smart, and even delicious to the eyes (I love the bright colors!!!). And, oh, spankin’ cute soundtrack as well, honest to blog!

Meanwhile, I am now looking for copies of her movies HARD CANDY, MOUTH TO MOUTH, SUPER, THE CURED, THE TRACEY FRAGMENTS, and AN AMERICAN CRIME [Ed. I posted a review of this. Just click]. Maybe I’ll try Netflix.