This is my first post for the A to Z Challenge, and my 100th WordPress post, yipee!!! This is actually a scheduled post, just like most of my next posts. Pretty busy so I’ll try to squeeze in my posts whenever I can. I’ll try to schedule several posts in one go so I won’t always have to worry about what’s next, he he…

For the first letter, I wanted to write about Ako, which is Filipino (Tagalog) for I, Me, even Myself at times, depending on how the sentences are formed. Why not? Maybe it’s a good way to introduce myself. However, I found that I could not decide which stuff about myself to write about. Besides, a lot of the stuff I am going to write for some other days will also be related to myself, anyway.

Then I realized this is a good time to share again something that I shared before, pre-WordPress. This is about me, and more of my father, written long before he departed. I initially wanted to share this as a tribute almost two years ago, but I was afraid that some people would take offense that I hadn’t posted anything about my mother as well, since she also passed away, two months after him. I didn’t want the additional pressure adding to my grief. The truth was, as said, this was written long before 2012, because something inspired me to write it, and not because I loved my mother less. When they passed away, I wanted to write a tribute for both but couldn’t find the courage to write anything, so I just posted videos of songs to convey my feelings. I just couldn’t get myself to do it, and I still can’t.

So now, I’ll share this and whatever anyone thinks, I’ll let them think. I thought that to talk about myself, it would be interesting to write about when I was born. It just so happens that this article already exists. And by the way, in keeping with the challenge, the word Ama is Filipino for Father.

I WILL write more about my parents, but please, not today. 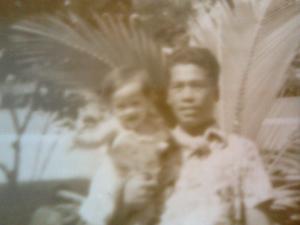 This is the one of myself and our “Dade.” At our back is the jeep I am referring to. Sorry the photo’s blurred. All of my baby pics are *sigh*

My oldest memory dates way back when I was just a year old. Many people do not remember things at this age so perhaps, you don’t believe me. But I do remember – and I remember a lot – and am sure of it. I have a picture to prove it, in fact. At least, to myself. Old and sepia-colored, that picture is still very dear to my heart.

If you look at it, you will see that my father — dark, smiling, curly-haired — is carrying a baby girl, Me. At the back is what we call an “owner-type jeep,” a modified version of the kind American soldiers brought to our country in the 1940’s, although this was way beyond that era. I distinctly remember staring at the hood, fascinated by it as someone carried me. It was either before or after the picture was taken. For sure, it was taken on my birthday. That, I don’t remember myself, but that’s what the date written on the back tells me.

Thinking about it now, I am glad my oldest memory was with my father. Not that I would have minded if it was my mother, though. For anyone of them to be in that particular memory is already meaningful to me. I love them and they love me. We were far from being the perfect family, and we still are not any closer to that, but I am thankful that I was raised well…Hopefully well, at least.

I love his smile here, so real and even innocent. This was post-stroke. This was the guy I grew up with half of my life, the one that I really, really miss. I love that he’s waving, like saying, “Don’t worry, I’m fine and happy here now, too.”

Now, I am helping raise my father. In a sort of way. A mild stroke made sure things would change. A stroke would not be called a “traitor” for nothing. Who would’ve thought? He smoked and had pot belly, but otherwise, we thought he was fit. Until we were all betrayed. Funny how things could literally change overnight. We were laughing the night before, the two of us, sharing the funny moment together, and the next morning, I met the eyes of an almost complete stranger. He was a stranger even to himself. For him, everything was a blur.

These days, he is much better remembering many things of the past, yet still forgetting many. He is not so much a stranger, anymore, except that he isn’t the father I once knew. Though parts of his long-term memory are either gone or simply forgotten, it is his short-term memory that has been badly affected. He will do something now that he will not remember ten, fifteen minutes later. If you mention it to him, he will deny it and he believes what he thinks he remembers. It is like an Alzheimer’s disease that is not debilitating, or an amnesia that isn’t really, know what I mean? In a sense, he was still lucky ten years ago, compared to people who suffered the same fate.

I certainly know I’m not the best daughter in the world. I am reminded of it everyday, that I usually suck at it.

Often, we argue because he doesn’t listen like a good kid should. Which is the problem, because he isn’t one. We know that (even if his maturity now is probably equal to that of a fifteen-year-old’s). He knows that, too. Therefore, he could be quite stubborn, rebellious, grumpy, unreasonable and uncooperative. Especially with me for he is aware of what I am supposed to be: his daughter, not his mother or big sister. Most times, he tests our patience. Many times, we fail. Many times, I fail.

This was him before the stroke. It’s one of the pics taken when he was a teacher. I haven’t gotten around to having it “fixed” yet. The perfect copy wasn’t returned to me by the people I lent it to. I love this pic!

Yet, whenever I remember the beginning of my life’s story, I resolve to be a better daughter. He deserves it, after all.

I was born weighing only three pounds. I was tiny, looked ghastly, and practically on the brink of death. The right technology, at that time, was not imediately available to save me. There was hope, however, and my father was determined not to let me die. In Manila, technology was better and more accessible, and so, he decided to have me transferred from the province.

You would have thought the idea would be met with complete approval. But no. For some reason, one particular person practically told him not to bother. This, from a very close relative, one you would not have thought would say something like that. For her, I was a lost cause, an expensive one at that. So why bother?

But my father stood his ground and snapped at her. “And why not? She’s still breathing, isn’t she?!!!”…So now, you can very well guess who won the argument.

I think I really owe my life to my father. It was his decision, after all. At that time, my mother was also sick, very weak, vulnerable, confused. Probably, she wasn’t even aware of my father’s plans. After all, I wasn’t shown to her until much later. If it weren’t for my father, I wouldn’t be here sharing this story with you. He had the courage and the smarts to fight for my life.

And so, here we are. Here I am, helping raise my dad. Not an easy feat, no, but it’s the least I can do. It’s not all hard, though. We basically get along fine watching TV or movies, trading jokes and playing pranks, exchanging banters, and sparring (our own style of playful boxing which I always win by tickling him until he collapses laughing on the couch). 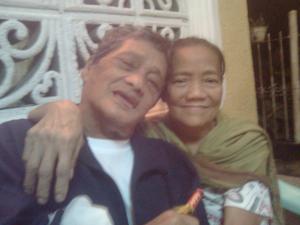 One of their last pics together, taken New Year 2011 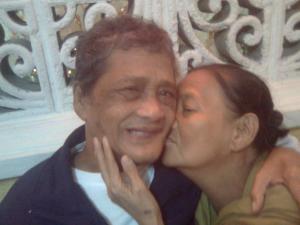 Another one of their last pics. I’m glad my mother did this. Couples may fight, but it doesn’t mean they love one another less. I guess that’s why she followed him as soon as she could…LOVE YOU BOTH.

(excluding A to Z Challenge badge)