Hello, folks! Hope you’re having a nice Monday. I am just posting this now (if you’re from abroad, time is just right; here, it’s almost midnight). Wanted to make it a scheduled post last weekend, but I wasn’t feeling well. Then I was way too busy at work today. And then, I was planning on posting something else then realized I hadn’t really saved pictures online. The good thing is, I have this! 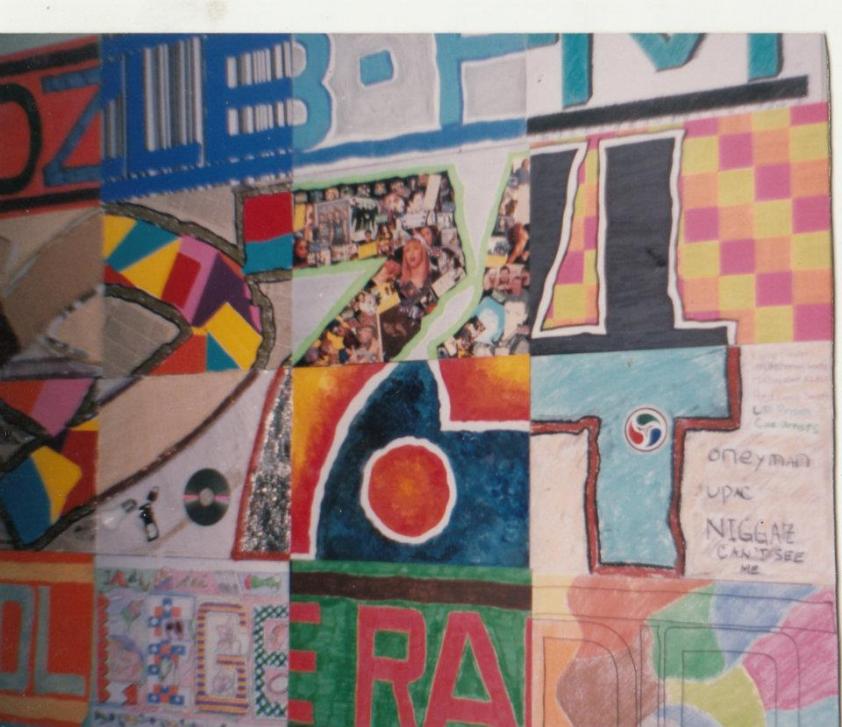 THIS was the mural made by me and my “colleagues” when I was still in college and working as a college radio DJ. I have very fond memories of my days as a DJ. Of course, sometimes, there are bad apples with good ones, so needless to say, not all those days were good ones. Cases in point:

A. The others were teasing me to Someone, a fellow DJ whom I wasn’t particularly interested in. They just naturally assumed it because Somebody Else said so. I got to talk to Somebody Else, who never really liked me, and he based the assumption on how I passionately commented on why Someone, who was appearing on national TV as one of the hosts of a show, should have been…I don’t really remember now what it was about, really, but it was clear I preferred Someone to do the hosting. Now, if you knew me for real, you’d know how passionately I gave my opinion at times (still do). But he/they didn’t know me and simply thought, “Oh, how funny, she has a crush on Someone. That would be good for laughs.”

It wasn’t a fun time to be teased, having been the brunt of jokes at certain phases of my life in the past, and especially when I knew they were laughing at me, not with me. I wasn’t blind: I could see the expressions, the exchanged looks. They would imply things (at least, nothing hurtful or insulting) and treat me like a gradeschooler: “Hey, see here, Someone’s here” or “Someone’s playing a nice song, listen.” I never liked being the center of attention so I knew I was blushing like crazy, which just worsened the situation for me. I just got too shy that I did not say anything, after all, no one actually said they were teasing me because of it. I just did not like being made fun of.

Looking back now, I regret not really standing up for myself that time.

B. When I like doing something, I work hard for/on it. That was how I was when they took me in as a DJ. I knew some jocks (not all) were not looking at me and Another Girl as equals before because we started out as newscasters, so we were like “seen” as temporary replacements when they’re busy with their studies or just feeling plain lazy. The agreement was temporarily, Another Girl and I would prepare and give the news while the station tried to see how to give us all shows. We were to sit in at times if a jock couldn’t make it. So there we were, preparing our playlist for the next show we were to sit in for, and the current jocks would just get something from what we prepared because they felt entitled to it, because we “weren’t” really jocks. So then, it would be our problem to fix because we’d have to find something else for our playlist. To be honest, I don’t even know if it was just me and not her. Did I carry a sign on my forehead that said, “Bully me, please, I won’t mind”?

We did prove our worth, though, so some of the not-so-nice jocks became nicer, hopefully sincerely. I’d like to think sincerely. The Program Manager and some staff did take notice of how hard I worked so they decided to make me Student Assistant. Naturally, I became more hardworking, which unfortunately, pissed some people off because they did not want to be reminded how wrong they were treating the equipment or that they should read the news or mention local ads. I guess people hate it when you do your job, huh?

One guy, newer jock from the newer batch, was so rude (and should I mention, friends with some of those who were teasing me before?), he treated me like trash during a show that we were supposed to both host. He wouldn’t let me talk and would cut me off while I spoke, on air, in front of his friends who were there lounging around watching and idolizing him. He would give me the evil eye like saying, “Go away.” I admit, I let my temper get to me — but I felt really insulted. How dare this newbie who just sounded like a lazy *something* on air treat me that way! I think every time I put down my hands on the table, they were not put there as lightly as they should have been. And I never forgot that the mics were very sensitive…

The next day or a few days after, the Program Manager talked to me and said “others” were complaining about my behavior. Again, I knew I should have said something and complained back about the others. But I just said sorry. And I said sorry because I was kind of given an ultimatum — wise up or go out the door. I wised up, that’s what I did.

I wanted to stay despite the fact that they were not treating me nicely and I ended up not treating them nicely as well at times. I stayed because it was the music, the songs I played that soothed my soul.  I stayed for the experience, not for them. Why should I let a bunch of bullies decide what I did with my life? I stayed because it was important to me, it was my therapy that they did not know about and wouldn’t even care about, because that was after my father had his stroke and he never really recovered  properly from it. If they wanted to act like children, then fine. I would be the mature one and despite their protestation in case they get to read this, even if they don’t agree, I was the mature one. I endured their treatment with a smile, joked back, helped.

And I was playing for me. I think that’s what mattered most. Music saved me.

Thank you for reading my #MondayMemoirs. If you have any comments or questions, negative or positive, just lemme know. 🙂

9 thoughts on “Thank You for the Music #MondayMemoirs”