Call it idiocy, but when I changed my relationship status in Facebook last May 21, I had expected the change to go unnoticed. I seem to remember having changed “Single” to “In a Relationship” before without being noticed because I did something with the settings (I may have done THIS). Naturally, that was still my frame of mind when I chose a newer status — “Engaged.” Just five to ten seconds later, people began congratulating me and I realized it was not an invisible change after all.

No wonder people thought we just got engaged! Instead of simply accepting the change I made to my relationship status, from “In a Relationship” to “Engaged,” Facebook announced it as just “Got Engaged.” It was kiiind of late…It would have been skipped, actually…Image Copyright © J.Gi Federizo

That is why people thought/think this life event happened just recently. Truth was, it wasn’t a pop-the-question kind of thing. More like a  matter-of-fact statement that began more than a year ago and went like this: “When we get married….” or sometimes, “When do you want to get married?” I say sometimes because these were mentioned in more than just one occasion. In several conversations, in fact.

It was never a question answerable with a YES or NO. No surprises pulled off like suddenly asking in front of a huge crowd (and it’s like the girl can’t say no that way, really). No relatives and friends secretly joining forces with the groom-wannabe. No expensive settings, elaborate plots  or maybe special effects like fireworks in the sky. No death-defying stunts. No cameras. No going down on one’s knee. No OMG-I’m-gonna-cry-pass-me-the-tissue moment. Nothing. Nada. Zilch. Zero. 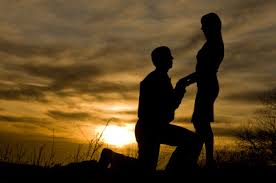 In other words, no proposal whatsoever. I had jokingly told him why he ruined the surprise by saying it many times rather than saving the question to pop at the perfect moment. Being the simple man that he was, he asked if that was even a requirement. The closest he got to asking it was by saying, “Why, don’t you want to?” (to which I asked, and still often ask, “Are you sure you will marry me? Me? This Me???”)

In essence, it was true. Why pop the question when you already know the answer? Not saying all other couples who went through this sort of modern ritual were wrong. To each couple their own. Just saying there is more than one way to do it. The important thing is the noble and sincere intention. It doesn’t matter how he asks — or says — it.

An actual proposal would have been thrilling, for sure, but there is a certain feeling to be had when your partner lets you know in his own way that there is no question, he is thinking of the — not a — future with you as his wife, despite all the flaws you have that you keep counting. He is not at all hesitant to state it as a fact, as something that seems almost tangible because the proof, your love for each other, is right there in front of you. Or is shared between you. However you say it, you get the point, I dare think.

And to be honest enough, I also somehow felt the thrill, what we call kilig, the first time he popped the — uh — statement. It’s how I wanted it, anyway.  It was the intimate (non-)proposal I wanted, with only the two of us in attendance. I wanted it simple, practical and sweet.

Here’s a surprise for you: THE WEDDING WAS LAST WEEK. Well, supposedly.

After my dilly-dallying and constant moving of the schedule of the wedding, I finally decided last November that this was it, I had to make a final decision and stick to it. There was no point of postponing things. Finally, then, I told him “May next year,” and that’s this year. We began planning and preparing the requirements until April when we finalized the date of the civil wedding.

Due to time and budget constraints, we decided on a civil wedding to be attended by mostly family and relatives only. To friends finding it out just now, most of you didn’t know and I apologize for not inviting, but I do hope you understand that it was never about or against you, nothing of the sort.

The wedding was to be on May 22, last Thursday, but you won’t see an actual wedding ring on my fnger just yet. What happened? Well, his mother suffered a stroke on May 8. Knowing how unwise and insensitive it would have been to push through with it, I made a decision, talked it over with him, then we told his parents we could move it on a later date. It was not a hard decision, really. It’s about health and family after all. If anything, it is buying us time to save up more and plan it better. No biggie. It was my birthday when we talked to them and I spent it the best way possible, by being unselfish.

So that new status the other day? Long overdue.

I had thought about it hard because I wanted to make sure I would do it not because I was desperate and afraid of growing old alone. I had to make sure that there was no doubt in my mind that he was the one for me and that I accepted who he was. I had to make sure there was no doubt in his own mind I was the one for him. Few people know of our story, or stories. Maybe we don’t look it but we each went through a lot in our lives. We’re still stones with rough edges. Together, we can smoothen out those edges.

Lifetime challenge, accepted…See you till next status update!!!

A BIG THANK YOU to all who congratulated us 😀